Amongst all the faculties and centres of Jamia Millia Islamia, the Faculty of Engineering and Technology will unequivocally serve you the best biryani! That is where all the students turn up when they feel like having Chicken Biryani! Yes..! At the engineering faculty canteen run by Naeem Bhai. He and his crew dole out plate after plate of this mouth smacking delicacy every afternoon during lunch time ( till whatever time the stocks last.. Experience says that they usually don't!) 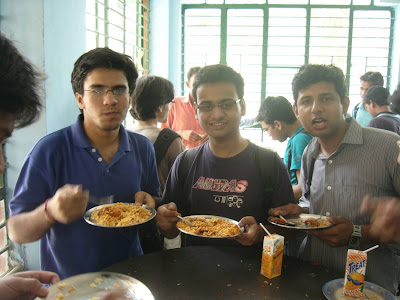 The last time we had biryani before we graduated.


So its been what.. like 4 years.. that Ive been hooked onto this rice preparation. Its a sinfully rich preparation I tell you, with all the masala and the flavours that it embodies..

I remember the first time that I had biryani at the canteen. I was pretty ignorant of its existence in the 1st few weeks of my college. Only somewhere in October did I come to realise that there was this one corner of the canteen where there was always a mad gathering. Not like my catneen was huge or anything.. but this corner was always noticeable with its mannerisms.
And this used to be the one catering the Chicken Biryani.

A stout guy, we lovingly addressed as 'Montu Bhai' was there with a saucer in his hand to dish out the rice preparation from a huge 'pateela' ( hindi for container used to boil milk in) and hand it out. And the junta was jumping over one another to get him to hand out a plate to them before the stock got over.
So I thought.. "I need to try this out." I purchased a token and got into the crowd just to get my hand onto a plate of biryani. It was the October of 2006 then and it is going to be the October of 2010 now and Ive never ever gotten over its taste. It was 15 Rs. then and it is 25 Rs. now. But it has always been one of the best things Ive had at my canteen. The helping was so decent that one plate was all it took to satiate your taste buds. And it was hot as hell! You could opt for a less spicy version as well, but you had to tell 'Montu Bhai' before he started moving his hands inside the pateela. Because once he began, there was absolutely no stopping him. His speed used to amaze me. 10 plates dished out in 30 odd seconds. This guy was fast.

Being a Muslim university, it was normal for almost all faculty canteens to be serving biryani. But it was the Engineering faculty canteen and Naeem Bhai's biryani that was famous. We had people coming in from far and near. And if you were late to arrive , you always knew it was over. 300 odd plates dished out in less than an hour.


Infact, I got my gang hooked onto Biryani and "Meetha samosa".
Anytime I was out of class, my friends knew where to find me. I was in the canteen hogging biryani or meetha samosa. Ohh I so loved it. It was just one of the many things that I loved about Jamia.
Naeem Bhai is still there running the canteen and so is Montu bhai dishing out the ' chicken biryani' to the junta at the Faculty of Engineering and Technology, Jamia Millia Islamia. Go try it out!

P.S. Maybe you'll still find me there, in formals though, taking a well deserved lunch break from office, reminiscing all the good times over a plate of biryani.

Bhai. Lovely Post. Was salivating while reading it. But you never took me there when I had visited Jamia, Bad...

Thank you!
When you were there, it was already post lunch..remember? The stock doesn't last that long! ;-)

well to be very frank i hv never tried this plate of biryani(coz of the unhygienic environment of the canteen)..bt nw after reading ur blog i really want to give it a try..:Pbtw it ws fun reading ur blog!!keep blogging!