Now that I have your attention...

Don't we all just love chaos ?

Ashis Nandy, a sociologist wrote back in 1980 that "in India, the choice could never be between chaos and stability, but between manageable and unmanageable chaos, between humane and inhuman anarchy, and between tolerable and intolerable disorder."

And was he right?  Just explore this great hubris called "Bharat" and you'll bow your head down to this great man.

This post is dedicated to me taking a shot at "Solo travelling".  Thanks to a cousin of mine, Aparajita, did I finally muster the courage to plunge into it. And it was awesome, scary yet liberating! I've always been a sugar and spice kind of a person. Liked a hint of a special something in my drinks. So I decided to experience the thrill of an unplanned journey by going without a return ticket.

Travelling itself is known to elicit very zany emotions. You start noticing the minutest of things and fall in love, every day, every moment that you travel.

#1. The contrasting reads displayed proudly at the platform book stall at Nizamuddin station. Man, there are more Amish Tripathi's per square foot display area of any book stall than any other author. Other than Chetan Bhagat, of course! That dude is everywhere.

#2. Trains. I am an absolute sucker for train journeys. Standing at the door and seeing the tracks intertwine and then merge into one, among other things. This time there was something more in store for me. The ravines between Dhaulpur and Morena.

About an hour from Agra, the train crosses the state border of UP for a brief soiree with this town called Dhaulpur which marks the eastern most fringes of the state of Rajasthan. From there starts the 50 km journey where the train chugs into Madhya Pradesh and into the town of Morena. Its a 45 minute journey, and all you see outside for the first 20 minutes are ravines, deep and snake-like, with stark vegetation thrown in here and there. With the sun blazing outside all you will remember will be 'Chambal ke Daaku'.

#3. Stations. Like I've always said, they're one's first glimpse into things about to come. Each one so different from the other. And they always have a story to tell. Some day, I am going to sit under a tree at a small, unknown station in a desolate part of India and watch trains all day long.

#4. Walking. Public Transportation. Just walk out of any station onto the road. Feel the city talk to you. And you'll know where to get your next ride. Two shared autos and a 2 km walk later I reached my destination. Had I taken a direct auto, I would have reached the same place in 10-15 minutes. But the 30-40 minute walking/public transportation combo made me talk to 5 different people for directions and I ended up remembering the street names for a long time.

#5. Gwalior Fort. Brilliant piece of architecture. Hill forts never fail to disappoint you. The views that you get from the top of the city of Gwalior are breathtaking. The walk from Urvai gate up to the fort is like taking a walk down the annals of history with a backpack.
You have have to strain your neck to get a full view of the exquisite sculptures of Jain Tirthankars cut into the rock on which the fort stands. They are huge, finely cut stone work and a treat to watch even when the 40 deg sun is making you sweat it out. "Just take out your cap and stop cribbing, you baby!" The statues keep you company all the way up to the fort. There the age-old Scindia school stands to give you a welcome. 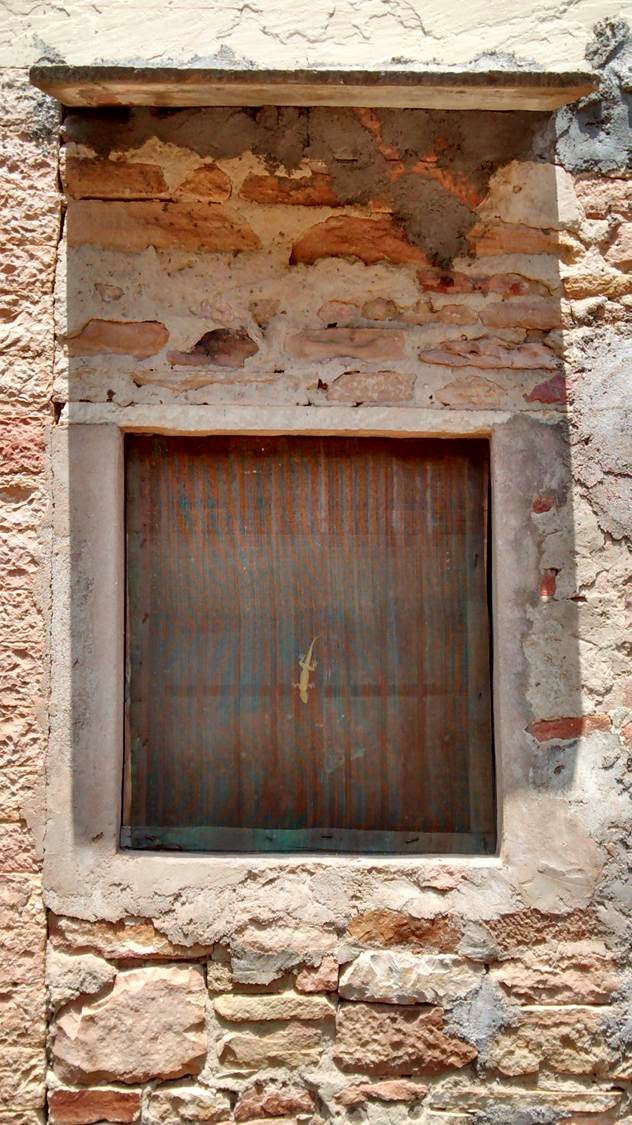 I was talking to the chowkidaar bhaiya and his pals, when I got a call from a friend that he was at the station. Invited him over. 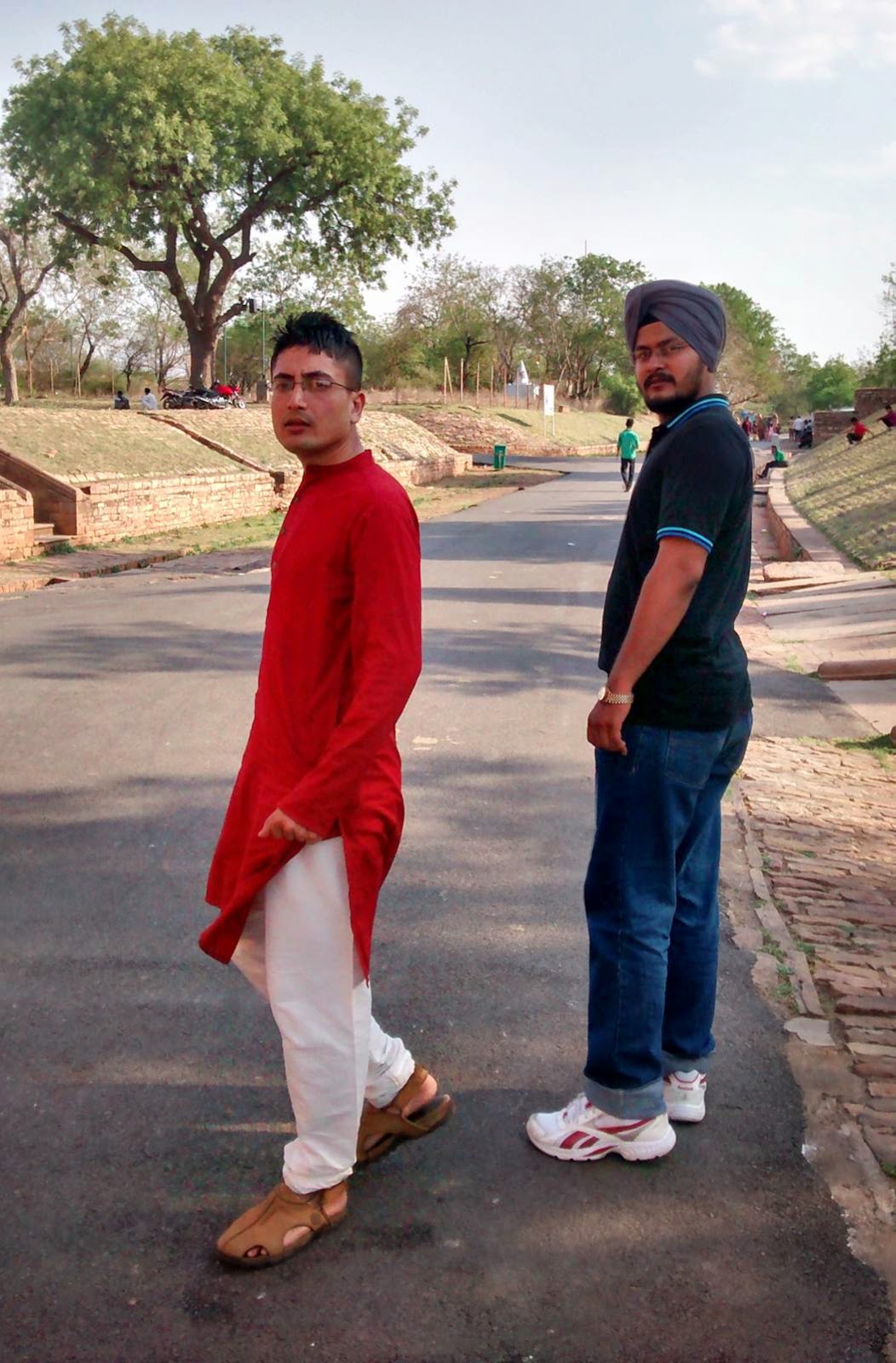 He was to meet us at Urvai gate. Now I wasn't going to walk all the way down and up again. Crawled into the back of a jeep going down. Chatting with the chowkidaar bhaiya had helped. Yay!

Just as we got down, our friend got off from his auto. And we saw a Mahindra truck going up. Politely asked the gentlemen driving it. He agreed and we climbed into the back. There! We had our ride back to the top. Laziness does pay!

Now we were 3 guys taking in the views at the top.

Decided to head to the Gurudwara inside the fort compound. Legend has it that the Sikh Guru Har Gobind Singh Ji freed prisoned kings from the Gwalior fort, marking an important event in Sikhism, thus the name, Gurudwara Bandi Chhod.

The gurudwara itself is a serene place to spend time at. Wanted to jump into the kund. Note to self : Always keep a towel when out hiking.

Yes, we are humans and we do feel hungry. And what better place than the 'langar' at the Gurudwara. I ate 7 rotis. Burrp! The freshly made achaar and channe-wali daal were delicious.

Saw the seva-daar serving water with this ingenious trapping. It was a drum on a trolley and the tap was controlled by a brake-like lever that the boy operated. Result : No water wastage, no hands touching the water. Brilliant.

While we were walking out, we saw this totally amazing couple who appeared Sikhs but were too fair to be Indian. Assuming them to be Indians settled abroad, we broke into a conversation with them, only to find out that they were American citizens who converted to Sikhism and were now running a bakery in Mexico. What amazed me was how they shifted flawlessly from greeting 'Sat Sri Akal' to us and speak Spanish when describing their plans of touring India.

2 bottles of chilled Maaza per person from the MP tourism canteen and 3 water bottles which we kept re-filling were all that we needed to get this tour done on a hot summer day in Gwalior.
Headed straight to the Man Mandir Palace, the main attraction of the fort. One that gets its way into all tourism advertisements. For those of you who don't know, the blue tiles that you see have yellow ducks interspersed in between.
Also the palace has 2 levels of basements. Very spooky.

There are a lot of other attractions to see inside the fort complex and a well-kept museum as well. The Saas-Bahu temple is what intrigued us the most with its peculiar name shouting a story. The temple called Sas-Bahu aur Sahastra-Bahu temple was built by one of the Kachhwaha kings depicting Lord Vishnu with a thousand hands for his wife who was an ardent devotee. Now when her daughter-in-law came into the family, she was a devotee of Lord Shiva. So a second temple was built next to the main temple, where Lord Shiva could be worshipped. Hence, the namesake : Saas-Bahu temple. Don't get me wrong, it's an amazing piece of architecture from the inside with beautiful carvings everywhere. Keep your camera handy! (P.S the title of this post is a takeaway from the above few lines.)

We got out from the fort complex using the other exit called the Alamgiri gate which took us through old Gwalior from where we had to chase a shared Auto heading towards to the station.

#6. The thrill of being unplanned. Now I knew the return part of my journey was going to be entertaining. But to this level? Stood in the rush hour queue at Gwalior station at 6 in the evening to try and buy a ticket only to be told that I had already passed the booking time and all I would get would be a general-unreserved ticket. Dirt cheap it was. Sources had informed me that Bhopal express departing Gwalior at 3 AM was the most reliable train I could take.

Packed in 3 bottles of water and got to the station at 1 in the night. It was already 18 hours since I was awake. Flitted between watching trains and partly dozing off. The only thing waking me up was the crackling voice of the Railway announcement lady informing about a train arriving or departing.

3 AM. No sight of Bhopal express. Briefly heard about some train standing at platform 3 going to Delhi. I went over. Saw the face of the TT. Seemed like a chilled out guy. Got into the sleeper coach. Saw the TT crowded around by some folks. A denomination later, I was on a side lower seat with the cool breeze sweeping on my face.

Note to Others: Always take a night train when you don't have a confirmed ticket.

8 AM. Reached Delhi. Read the name of the train when I got off!

Now to a good bath and then straight to office. To sleep! Yawn!