The Puri-Satapada highway ( NH 203A) gives a whole new meaning to the term "making hay while the sun shines". 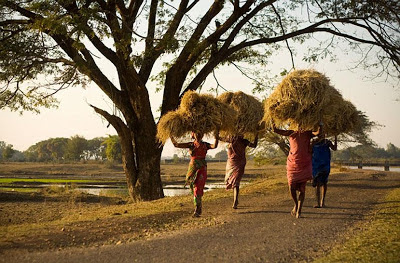 Catch a rickety private bus from the stand on Grand Road near Gundicha mandir. The bus charges you a cool 30 Rs. and takes a behemoth 2.5 hours to cover the 48 km stretch from Puri to Satapada. 'Sata' (meaning 'Seven') and 'Pada' ( meaning 'Village'), together meaning 'a group of seven villages' for the more touristy folk is from where you can access Chilika Lake.While many have written about the wonders of Chilika, known for its Irrawaddy Dolphins, Red crabs found on the Rajhans Beachstrip separating the brackish lake from the Bay of Bengal, and the the hordes of migratory birds that visit it during the winters, it was something completely different that struck me during my journey.

Puri, surprisingly has no State run bus service. There are OTDC buses, but they only run on package tours, apart from private tour operators available for booking at every hotel/lodge. If you are a backpacker, don't make the mistake of taking them. When you are scouting for a a bus near the Grand road, the bus operators try and compete with themselves and the 'Piaggio Ape' Autowallahs, telling you that they are the only ones that leave you closest to the lake. Apparently, all of them leave you at the same spot.

Our bus ride was all about Women power. There were atleast 20 women in the 25 seater bus which managed to stuff in 50. Ladies wanting to get off in an en-route town for work, school teachers, aunties visiting relatives. All of them knew the conductor well enough for him to shake off two men from their slumber just to get seats to the ladies. Pretty girls do have their way everywhere! Seems like, we were the only tourists on the bus. And in the limelight were a village couple romancing amidst all this chaos. The guy apparently telling the girl some funny joke!
The bus makes its way through the outskirts of Puri and halts so many times to pick up or drop off passengers that you start suspecting whether it is even moving. And then it takes a 30 minute halt midway in a town called Brahmagiri, where we hop off to gorge on a local variety of mango, 1-rupee samosas and vadas and a curiously familiar-tasting sweetdish made with curdled milk selling at 25 Rs. for a pao.

One of the passengers had to eventually bad-mouth the conductor to make him get the bus back on the road. As one gets closer to Satapada, Hay, was all there was on the highway. Folks cutting it, sifting it, ladies tying it up in bundles, drying it, men on top of huts using hay stacks to construct the roof. And farms with half cut stock as far as the eye could see.

Finally when you get to Satapada, Chilika presents its windy side to you.
Chilika motor boat association wallahs keep approaching to coax you to go see dolphins for 900 Rs. for an hour and half, or even take you to the Sea mouth for an additional 600 Rs. ( P.S. I put my Sales skills to test here. The rates are highly negotiable).

There are normal boats as well which ply on the lake ferrying people to another village for 15 bucks a hop or Rs. 30 as motorbike freight. 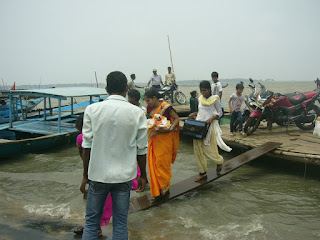 What's more to Chilika, you ask? 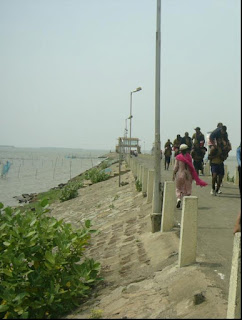 Jetty to the West side. Where we had the luck to see young sailors being trained in rowing and then getting punished.
The jetty banks are a peaceful place to sit and relax. Go ahead and taste the water. Its pretty clean, but quite salty. The sun doesn't feel too hot and the salt-laden winds keep trying to push you down. We even slept off in the shade in the jetty structure for quite some time. Plus you get to capture nice clicks like the ones of this old fisherman who was trying to steer his boat against the strong winds. 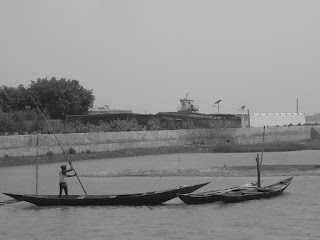 In the afternoon, we decided to have lunch at the nearby OTDC Yatri Niwas which cooked really nice Egg Masala, but had salty water to drink and to wash your hands with.

For our return journey, the conductor of the bus we were about to board was promoting the LCD in his bus so proudly that both my sister and I ended up putting 'tokris' ( read 'village baskets' ) on our heads and sleeping off during the entire journey when he decided to play the Salman Khan starrer 'Garv'.

Like we hadn't had enough salt rubbed on our entire body already!

Email ThisBlogThis!Share to TwitterShare to FacebookShare to Pinterest
Labels: Around the World, Chilika Lake, Puri, Satapada

And, the Puri beach gets me back to my love!

Yes. Its been quite some time since I wrote.

But 3 days of backpacking in the bylanes of this quaint little town on the East coast, and I cant happen to contain my thoughts. 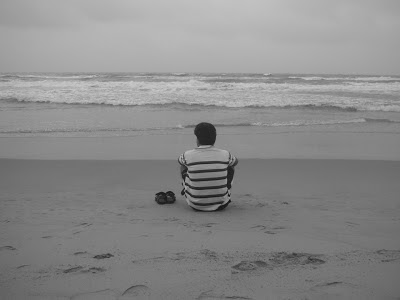